The BYTOWN MUSEUM: A perfect place to begin your exploration of Ottawa, the Nation’s Capital.

Housed in Ottawa’s oldest stone structure, the BYTOWN MUSEUM explores the city’s history from the early years of Rideau Canal construction, through the rough and tumble days of Bytown, to its emergence as Canada’s capital and beyond. Enjoy unique artifacts and exhibits year-round. To assist with a pleasurable visit, and included with admission, is a six-language audio guide available in English, French, German, Spanish, Mandarin and Japanese. Combine your visit with a lovely stroll along the locks and behind the Parliament Buildings, an oasis along the Ottawa River, all within steps of the Museum. You can also head to the adjacent Byward Market for your choice of any number of delightful restaurants and wonderful shopping. A well rounded visit to begin your stay!

Collect, Study and Preserve: A Brief History of the BYTOWN MUSEUM 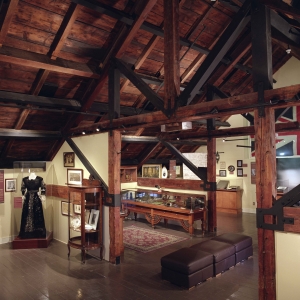 After “considerable talk among the ladies of the city” about the preservation of Ottawa’s rich cultural heritage, the Women’s Canadian Historical Society of Ottawa was formed in June of 1898. With the motto of “Love Thou Thy Land” their goal was “to encourage the collection and preservation of Canadian historical records and relics and to foster Canadian loyalty and patriotism.” The WCHSO laid the foundation for what would later become the BYTOWN MUSEUM.

The early years of the WCHSO consisted of the writing historical papers, regular meetings and “Loan Exhibitions” – displays that brought together artefacts from the private collections of the members and local history enthusiasts. By 1917 the burgeoning WCHSO was in dire need of a permanent home. After years of wandering, the former City Registry Office, located at 70 Nicholas Street, was acquired and renamed the Bytown Historical Museum. The Museum was opened on October 25, 1917 by Mayor Harold Fisher as “a museum for relics and souvenirs;” celebrating the occasion with its most comprehensive loans exhibition yet. Many of the items loaned would become some of the first permanent accessions into the collection, allowing the WCHSO to finally begin to fulfill its original mandate to collect and preserve.

After years of collecting, with a boom in the 1930s, the WCHSO was once again on the lookout for a larger more suitable home. In 1948 the Commissariat at the Ottawa Locks was proposed. Significant funds were raised to make urgent repairs to the dilapidated building and the WCHSO took possession of the building in September of 1951. Despite being described as “encrusted with century-old dust and grime” with deteriorated plaster, a leaking roof and an inadequate electrical system, the Building Committee report described the Commissariat as the “perfect setting for the BYTOWN MUSEUM.” After much needed renovations, the BYTOWN MUSEUM opened its doors in the Commissariat (our present location) on June 27, 1952. The Society opened its membership to men and changed its name to the Historical Society of Ottawa in 1956.

The 1980s was an era of exciting growth for the HSO; first with the inaugural publication of the Bytown Pamphlet Series and later, under the leadership of their new landlord, Parks Canada, the complete renovation and restoration of the Commissariat between 1982 and 1984. When the Museum reopened in 1985 BYTOWN MUSEUM Treasures highlighted key artefacts and recent acquisitions including some of our most iconic pieces.